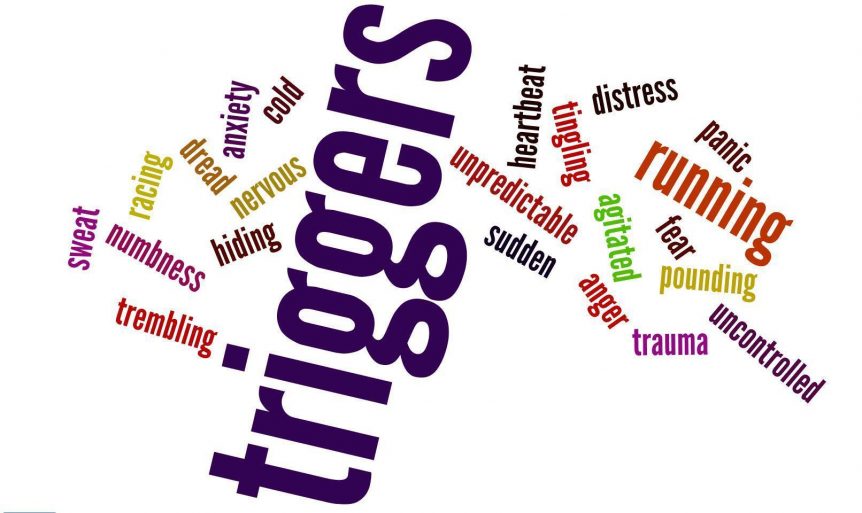 This generally means that one has gone from a calm and relaxed state with a clear focus in this moment and what is in front of them to a state of upset. Suddenly the body feels in a highly activated state. This activation can come in the form of a pounding heart, difficulty breathing, an urge to run, numbness, drained of energy, or being frozen in place. Suddenly, one’s mind is unable to follow a line of thought or concentrate on the task at hand. Your mind simply is reacting to input flooding in from your senses. What a moment ago had no impact on your choices and actions suddenly may now be the only thing holding your awareness.

Common in post traumatic stress recovery of these experiences of reliving an event from the past as though you are there again. A full-on flashback is a horrible experience, as bad as when it first happened. It may feel even worse because now you’re out of time and place and that adds to a sense of powerless. Something that sets you into this place is a trigger. For example, if you were recently in a car crash the sound of brakes screeching or the site of the vehicle out of control and heading towards another may set off a sense of re experiencing what had happened to you. But, not every time and not for every person will this re experiencing happened. Sometimes that sound or that site might remind you of might remind you of something that happened in the past and you will have memory. For example if I see a motorcycle laying down the side of the road that reminds me of some experiences I have had while riding. I can share those experiences or save those stories for another time. All the while remaining calm relaxed and focused on the task in front of me.

Just as there is a difference between a reminder and a memory experience there is also a difference between a flashback and a trigger. A memory is in my control. I choose the images, the feelings, the aspect of the events as they occurred, and the meaning of the meaning of it. A triggered state is out of my control. The images, the feelings, and my reactions happen without any consideration, or reality testing on my part.

Triggers:  Automatic reactions from previous events- flashback to a time and place with a limited set of possibilities. Focus of attention is taken.

Reminders: Activation of information about previous events from the perspective of one’s current time and place. The focus of attention is chosen.

Triggers can come in many forms and may lead to many reactions. Some much more severe than others.

Recently a young woman shared with me what it was like to hear her stepfather had suddenly died. While they had had a very rocky relationship growing up, more recently she had seen a different side of him as he related to her young children. And she was able to see more clearly the possibility of a positive relationship. But suddenly that ended. When she got off the phone, she was frozen. She could only feel a sense of being locked up and unable to do anything. She had been triggered into a state the only thing was to be still and wait. Maybe because it was him and there had been a history when doing nothing was the safest thing for child to do. Maybe it was because she had never been confronted with death so closely. Maybe because she was already highly stressed by taking care of others and family. But at that moment she was not making decisions as to what was best for those she loved. After some time, she was able to come to an awareness that she was triggered.  Because she has experienced using Thought Field Therapy before, she was able to do the crisis pattern and come back into the moment where she was safe to take care of her baby and deal with this tragic turn of events.

She and I had talked about her growing up and her stepfather before this all happened. When she would talk about him or events that included him, she was able to focus on aspects she thought were important or useful to talk about. She could do this as we tried to piece together her identity grounded in her chaotic home. As we talked, she was reminded of different events and people, but always able to stay relaxed in the body and calm in her mind focusing on the aspects she chose. Very different than news of his death that triggered her…

When you set an alarm clock, this is not a trigger. Even though you may feel like it when you suddenly wake up you, know where you are and you know the time of the  moment you are in, and you take action in that moment. Turing off the alarm, getting your day started, possibly going back to sleep. While a police siren is a warning sometimes, sometimes it is a trigger. Our experiences and ways of responding to the world around us vary much more than the number of the days of our lives. We develop our methods of interacting with the world through the gathering of experiences unique to us. Sometimes experiences happen to us, while other times we create those experiences, but what remains is not so much the experience, but the emotion attached too and created by these experiences. Which is why different people can go through similar situations, some come out with trauma while others do not.  This is a reminder to be kind and accepting of other’s experiences, and mindful that triggers are something we all encounter. It is not to judge in others what triggered the trigger, but hold an accepting and safe space for listening, responding and healing.